Crates are custom items exclusive to Earth MC, Crates can give you Gold ( the currency of the server. ) Crates also can drop Tridents, totems of undying, and previously, Sponge and god apples. 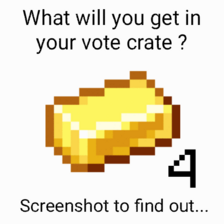 Crates are received from using the /vote command and clicking on the links provided. Clicking on the links takes the player to a minecraft voting site where once inserting their username and playing a quick Captcha game they are awarded with 1 crate for each links they have recieved. Each of the links has different cooldown timers. One has 12 hours while the other has 16. It was once possible to save the links to your phone or other devices and vote offline but it was patched soon after discovery of the exploit.

To open a crate, simply place it down anywhere and it will begin rolling like a slot machine.

I know the math doesn't add up but its an estimate.

Bruh Crates are extremely rare variations of the normal crates where one each is given to every online player once the vote number for EarthMC on the vote site reaches a zeros point (4,000 , 5,000 etc...). They have different drops than regular crates, and come with often unobtainable items such as Bones or Leather.

Due to the infrequent nature of the Bruh Crates we are unable to provide statistics.

Crates, that I know of, have been changed 4 times.