The Caspian States, formerly known as Caucasia is a nation with its capital at Alania and admits towns with the region around there.

The nation of Caucasia was founded when Alania voted to leave Persia after Persia had internal problems. It was founded on December 3rd of 2017 and after a few glitches with name (caucasus, Caucasus) it was finally named Caucasia. It had some early expansion, on December 9th, Caucasia became then 10th largest nation on the server, before shrinking back to the 11th largest nation. Caucasia made many attempts to fully unify the Caucasus, but struggled, eventually gaining Hattusa and on January 27th Abkhazia, breifly unifying the Caucasus, before Abkhazia left.

Caucasia underwent major changes as Alania, the primary (and for a while only) town, fell from 69 people to 27. Along with limits on numbers of outposts this severely limited Alania and this has led to Caucasia acting as an Alanian Colonial Empire. However Caucasia started becoming a vehicle for greater Alanian involvement in the realm of foreign affairs, being invited into debates surrounding the division of Africa, the balance of power in Southeast Asia, stability in the Caribbean, and expansion in the Pacific. This involvement in Foreign Affairs would continue throughout the entire history of the nation.

Ottoman had had a long history, but always plagued by its failure to attract other towns, it collapsed and due to Alania formerly being in Ottoman long ago merged into the Caspian States.

By the end Persia had never recovered from a semi-collapse and the old nation of Persia fully collapsed and joined the Caspian States.

Caucasia was slowly failing, losing its purpose and as Alania shrank and all other towns in it collapsed. However things started quickly changing for the better. Ottoman under BimAliKemal had also started to slack and BimAli, seeing little future for his nation collapsed it and its one and only town, Ankara, joined Caucasia. It was then planned to change the name of Caucasia to Caucasia-Ottomans and hope that it could grow to fill the western Middle-East. But then a day later the old Persia which Caucasia broke off from also merged into Caucasia, bringing all of old Persia into it as well. This new nation, made from the merger of 3 nations needed a new name, and the Caspian States was chosen as representative of Central Asia and the Middle-East.

With a new found purpose and larger lands, Caucasia renamed to Caspian States and underwent a transformation of the Government, changing from a Sovereign with referendums to a Duumvitate, with an unelected Sovereign and an elected First Minister. It participated in World War IV and managed to conqueror surprisingly much before the server crashed.

Towards the end of April and into the beginning of May the Caspian States started shrinking. It did not lose any towns, but the largest town, Alania, continually shrank down to 15 players. Although the Caspian States shrank in population, they did not lost their prestige or much of their power, losing only their /n list rank.

The Caspian States continued trying to expand and by happy coincidence pushing into the Steppe with the towns of Scythia and Farah. Then when a citizen of Alania left to make his own town he asked to join and was invited in, making him the only town not in the middle-east to join. Later the Caspian States gained another town when, during Split of Lantau, Ecbatana asked to join. This rapid expansion added many new actives into the nation. In early June, the Caspian States again continued growing, gaining 2 towns, one in Syria and the other in Egypt, extending the Caspian State's reach deeper into the Middle-East. However the expansion came to an end.

The Expansion came to and end and the Caspian States saw the shrinking of Alania and continual encroachments by other powers into their lands. Russia started inviting towns that were well within the Sphere of the Caspian States and other nations in the Arabian Peninsula also started taking towns from the south. It also lost many towns to inactivity including what little remained of the ancient Persian Empire.

After Terra Nova was announced the nation took a turn for the worst. Many towns fell or left it and PolkadotBlueBear became inactive. It still soldiers on, but in a much reduced state, like most nations in the Interlude between Terra Nova announcement and the opening of Terra Nova.

With the opening of Terra Nova on Nov 1 2018 the Caspian States has settled into inactivity as all other nations on EarthMC 1.0 have.

However due to a lack of active population voting was suspended and the Sovereign took full control as People's Regent, ruling supreme until the next elections and reinstitution of the Duumvirate

This eventually turned into the Peoples Regent, who leads until enough active people are around to restart elections in which place PBB will retain power as sovereign but will take a step back from politics in favour of the First Minister.

The First Minister is elected every two months by popular vote from all citizens of every town. He\She is responsible for the daily functioning of the Government along with the Sovereign. In theory the First Minister should be of equal power and importance as the Sovereign, but in practice the First Minister has not done much. The first First Minister was Ununoctum, formerly TheRailfan, of Sumqayit. However due to inactivity the Soveriegn has assumed the role of Peoples Regent, which combines First Minister and Sovereign powers together until enough people are active for new elections.

Political Parties are allowed, although due to the lack of an active Parliament there are presently no officially recognized parties. That being said it is thought the International Socialist-Futurist Party is believed to have a presence in the nation, along with some Center groups and even a Far-Right before it collapsed due to inactivity and voter dislike.

The Caspian States has a military but it lacks manpower. However is functioning and occasionally sees combat such as the Caspian-Tabarnia War and World War Lag. It also shows up as observers on the side of its allies, rarely fighting but watching and supporting.

It does have a history of military action, usually supporting the defender when they have been attacked without an effective cause. Such action happened a few times in the Battles of Sorong, Battle of Georgetown and Ecuador and the Terror of Khartoum.

The Caspian States desires for friendly connections to all and is usually neutral. The Caspian States try to focus on stability and prosperity rather than war, and its foreign affairs reflect that, with over 30 nations allied.

The Caspian States foreign affairs are most neutral, and will only fight if provoked, however the Caspian States has defensive pacts with some other nations in order to better defend the rights of neutrals. The Malayan Pact is a good example of this, fighting to protect neutrals but only if provoked.

There is also a history of the Caspian States supporting lesser powers against larger powers when the larger nations aggressive action seems unwarranted. Such as supporting Sorong, Mayala, and IU many times against Japan; offering assistance to Australia against Kowloon and Japan; supporting Guyana against random Fascist terror attacks in the Battle of Georgetown and Ecuador; and against rouge noob-killers at the Terror of Khartoum. Although the Caspian States usually takes a back seat to the larger wars. 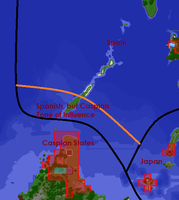 The Caspian States allows the individual towns to decide on what type of economy they want to have. Caspian citizens and companies do get the ability to put up trade signs at the ShopCaspian shop at spawn as long as they ask first.

Due to the fact that Alania is so much more developed than the other towns there is redistribution of some wealth when the richest Alanian pays gold to the other towns.