Dnipro was first created on May 15th, 2022 (the first day of access to non-premiums) by Kotik_2ua. It was agreed since before the launch of Aurora that Dnipro would be assigned to Kotik for development of the transport systems down the Dnipro River (from which the town gets it's name). Dnipro immediately joined to Ukraine nation and has never left it (as of 18.7.22 this is incorrect- Dnipro has left Ukraine for White Ruthenia).

Dnipro has continued to expand, as well as gaining a neighbor in the south (Zaporizhye), with whom it holds close relations. Dnipro's expansion recieved a huge boost after the allocation to Kotik of a shop plot in Ukraine's spawn. The town's main square was created later in the game, from Kotik's love of axolotls. It is currently under reforms, during the new attempts to improve the quality of building in the city, after multiple complaints. A new residential district is under development on Shevchenko Street in North-Eastern Dnipro, and many new roads are being created.

Dnipro has been since the start caught in between threats of both civil and international war due to the leader being involved in both the Ukrainian and International communities in Ukraine (halp idk how to word this). Tensions were pushed to the max when an agreement was made about Ukraine joining a supernation with Russian_Empire, which Dnipro, along with many other Ukrainian-led towns, did not like. Kotik, along with GODSBESTWARRIOR, Gamezadmin, and Eternaljuubi, formed a new government and attempted to buy Ukraine from Keroribbit (the leader of Ukraine) under a new, more democratic leadership (funded by GODSBESTWARRIOR) and with the capital in Dnipro. However Kotik and Juubi became scared of international threats during the transition of government, and convinced Kero to remain in power. Kotik was also removed from her position of Heir during this time.

In the town, however, the threats have been hardly noticeable, due to Dnipro being far inside the borders and relatively isolated from other towns (except Zaporizhye). However, there have been multiple instances of Russians griefing the land outside, for example creating a massive 'Z' outside the territory, or leaving nasty signs for the residents. Unfortunately the mods have done little about this.

As of 16.07.22 Dnipro has declared its independence from Ukraine due to the theft of all the gold in its town bank by the resident eternaljuubi, then subsequent harassment of the mayor by juubi and friends, as well as the lack of Ukrainian leaders to do anything regarding the situation. The short term cause of the declaration was the theft of all of the contents of the Dnipro shop in Kyiv under the new leadership, after Ukraine was sold by Keroribbit.

kotik_2ua, mayor of Dnipro- ‘I am sorry it had to come to this, but I’m leaving Ukraine with my town Dnipro, forever. This to me isn’t the Ukraine that I know and love, it is a fake state run by Americans who do not have the best interests of Ukraine or Ukrainians to heart’.

The first construction in Dnipro was the apartment block Kotik created to house residents. This did not work out, and now it is used as a storage and enchanting room. 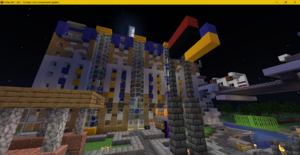 Later was created the metro station, linking Dnipro to Kyiv. This is based off заводська station in real-life Dnipro. 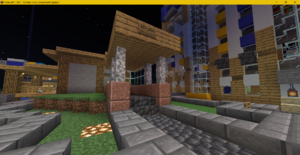 the entrance to the metro 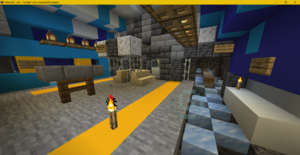 Two small bridges were created, linking both sides of the Dnipro River. They are also based off real-life Dnipro. 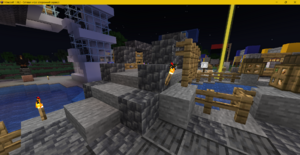 first bridge i forgot the name 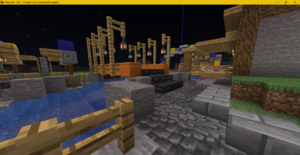 Next the town's main sqaure, Axolotl Square, was created, when Dnipro joined the Ukraine Axolotl corp. Recently, Kotik has been working to improve this square, including adding a lot of mapart and benches.

Around the same time as Axolotl Square, the second, overground metro station was started as the first big project since the apartment block. It is still under construction and hopes to link Zaporizhye and Dnipro in the future. It is based off Dnipro metro station in Kyiv in real life, a personal project by kotik because of her love of the station. 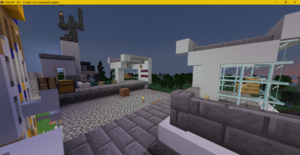 A new building is planned in Dnipro, the Department of Infrastructure building. It will be the biggest and tallest by far, and very expensive. It was planned by Eternaljuubi, the former Minister of Infrastructure.

well since most of the town is dead

Generally all residents live on the left bank except for a few buildings and older residents. The right bank is much more jumbled, with older buildings made at the start by kotik, dumps of stuff that has not been sorted out, etc.

A residential district is planned in the North- East of the town and roads have started to accomodate it, but it is not completed.