Germany was founded on May 2nd, 2022 becoming the 2nd nation created in Europe and 3rd on Terra Aurora. The nation was created by Fruitloopins.

On April 12th, 2022, the MOTD on the EarthMC Minecraft Server was changed to a set of coordinates encoded into base 64. Going to those coordinates, players would find a message quoting a YouTube comment made by Fix on the EarthMC: Terra Nova update teaser video. This would imply to players a server reset.

Rumors and theories would spread quickly from players and even Fix himself. On April 19th, 2022, Fix announced on the EarthMC Discord Server the upcoming release of Terra Aurora. That same day, TurquoiseNomad created the Germany Discord server with a large community of players to plan the nation of Germany for Terra Aurora.

TurquoiseNomad created the town of Paris after Fruitloopins began funding a couple of capitals across Europe. Players AD31, Icrelei, Tamar__, and MaddieMao would come to assist in mining gold to create the nation of France on May 3rd, 2022 by TurquoiseNomad.

Hours in the Mines

After dozens of hours mining, Fruitloopins and Basically_Andrew finished claiming Berlin to the maximum 940 town blocks. On May 27th, 2022, the capital of Germany, Berlin, was the first max claimed town on Terra Aurora. Below is a Franco-Germany Discord announcement of Berlin reaching max claims and an animation of Berlin claiming generated EMC Dynmap#4709.

On June 6th, 2022, TurquoiseNomad was assassinated by the people of France. The powers of mayor of Paris and nation leader of France were transferred to AD31.

The nation of Germany is primarily located in central and western Europe. 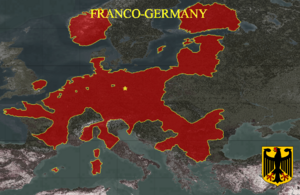 Position in Relation to Other Nations

South of Berlin is Venice.