Korea, (Korean: 한반도) is a region that comprises the Northeastern part of Asia. The first nation of Korea was founded by SpookyScoops on November 5th, 2018 as the 8th ever nation of EMC Terra Nova. The nation was well known for being the first Asian nation of the server. It was also known well for being the first nation to cultivate villagers.The main language is English, but due to some Korean players Korean is a minor language.

Korea consists of a peninsula and nearby islands located in East Asia. The peninsula extends southwards for about 300 chunks from continental Asia into the Pacific Ocean and is surrounded by the East Sea to the east and the Yellow Sea (West Sea) to the west, the Korea Strait connecting the two bodies of water. The southern and western parts of the peninsula have well-developed plains, while the eastern and northern parts are mountainous.

Forests in Korea have been wiped out over the years as megastructures razed down the original landscape of Korea.

The concept of Korea was established well before any effort towards forming the nation had begun. Months of preparation led into forming Korea which allowed for a peaceful and easy uprising of the nation.

The first town of Old Korea, Seoul, was established directly upon the Han River by SpookyScoops on October 26th, 2018, setting it as the 5th ever town established on the server. Seoul was one of the very few Asian towns during this time, along with the neighboring town of Beijing (formerly led by No_Jewtsu). During this time, most of the player base was entranced in the race for the accumulation of gold which caused the transactions between the two towns to be minimal during this time. 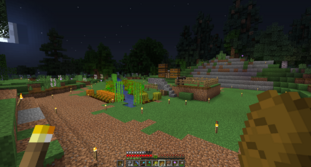 The beginning of Seoul during the early access period. October 26th, 2018

Not much else happened during the pre-founding period of the nation. It was mostly a solo grind led by the great king himself. Notable achievements during this time are acknowledged as: 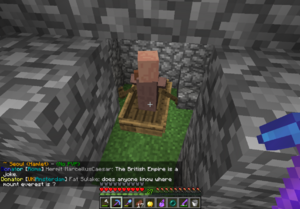 The nation was officially founded on November 5th by SpookyScoops as the 8th official nation on the EarthMC server.

In the middle of 2019, the nation of Shimazu created a town on the east side of the Korean Peninsula.

On December 7th 2019, the First Temple of Korea, run by the Emperor of South Korea and Mayor of Seoul DudeJawayJr, held a public sermon and marked the coronation of EonniJay. The alliance between South Korea and Shimazu was also blessed.

January 7th 2020 marked a prosperous day for the fledgling region, an alliance between South Korea and North Korea was created between Ionao, the Dictator of North Korea and Rezolent_, the Emperor of South Korea. The alliance combined both nations to form a new nation under the name the People's Republic of Korea.

Some time around July 2020, Nalasleafheart left Seoul, Korea without notice and joined the the country, Shimazu. Shortly after Nalasleafheart left, Seoul rapidly lost almost all of its residents, which significantly impacted the population count. After Seoul's decline, the emperor of South Korea, Rezolent_ also left.

On August 15th 2020, xSxlty, the new mayor of Seoul, made the executive decision for the metropolis to leave the Korea and accept a national invitation from Shimazu. xSxlty ignored all attempts to communication with Korean representatives.

The Seoul Resolution failed after Shimazu proposed a treaty to "keep Seoul but to promise to not expand into Korea further." Korea rejected Shimazu's proposal and would only accept a proposal if they would agree give back Seoul. The leader of Shimazu, Qorrin, and the mayor of Seoul, xSxlty, then left and the discussion ended. On August 16th 2020, the People's Republic of Korea officially declared war against the Shimazu Realm.

The nation of Date declares war on Korea shortly after, saying the cause for war is that Korea supports their enemy, Shimazu.

The Death of The People's Republic of Korea

Korea was steadily losing residents with no sign of stopping. On September 2th 2020, the mayor of the town Kapsan and a minister of Korea, Phi___, left the nation to be an independent nation. Shortly after, another minister who was the mayor of Daejeon, Akscoop, left the nation as well. A day later, Kapsan joined Japan, and then finally, on September 6th 2020, the town of Daejeon joined as well.

Many of Korea's other towns fell due to the inactivity of their mayors, and to this day haven't made up the losses of their residents from inactivity. The fallen town of Wonsan was disbanded by the mayor and a minister of Korea, ubadmeme. This left Korea with only 1 minister left, the mayor of Hamhung, Computer_x64.

Sometime in October 2020, Ionao, tired of the Japanese swarm of towns in Korea, decided to move to Antarctica, putting his town up for sale.

On November 9th 2020, Yllalen managed to assume all control of the nation, disbanding the inactive Korean cabinet and forming the Kingdom of Joseon. This marked the death of the moribund People's Republic.

With from the Kingdom of Joseon.

Sometime in January 2022, Japanese Korea's leader was nominated to Illunox, and he is still the leader to this day.

On the first day of Terra Aurora (5/1/22) Seoul was founded by milleway. The Leader became Atom after Nice_pengguin became a minister to fill in for a minister that left.

In war with the North Korea