From EarthMC
(Redirected from Malaya)
Jump to navigation Jump to search

Malaya is a nation with its capital on the Malayan Peninsula.

King Parameswara is the ruler of Malaya. 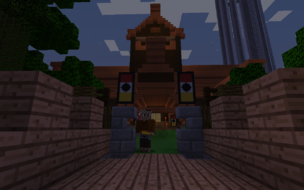 Parameswara with his stick

SlyCooper2000 is the Councillor of Malaya.

Moope787 is the Head General of Malaya

SuomiTheWeeb is the "Royal Imam" of Malaya.

Malaya is a Muslim Nation/Caliphate.

The Al-Iqra Mosque in Malacca currently holds a copy of the Al-Qur'an copied by Suomi. 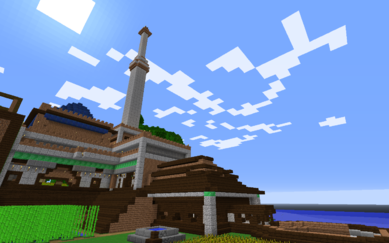 Capital city, and oldest city within Malaya. Formed by Parameswara (at the time Tinmanalpha57) and TheMCJarhead, Moope787 was around the town as well at the time but was Mayor of Ireland as Kuala_Lumpur on Nov 25, 2017.

Point Nemo was founded by Metro_Snak on June 15, 2018, with the help of Malaya as well as the nation of Seaterrica. It resides upon an artificial island at Point Nemo (near the real-world Pacific Point of Inaccessibility.)

Started roughly around Mar 20, 2018, Malaya was shortly successfull on reaching N list 1 (with the joining of Hong Kong, Sorong, and Dumai), but after numerous situations and complications (of which included: a short lived war with Japan which lead to Malay victory, the formation and sudden disbanding of Indonesia, as lead by Dumai, and a war with CCCP, which ended in defeat), Malaya would disband on April 22, 2018 to join Japan (Malacca being the only town still left in Malaya at the time). During this time, Malaya was, more or less, an identity unique only to Malacca, and helped to encourage Parameswara to claim the peninsula in it's entirety. Malacca, upon completing this claim, re-established Malaya on May 17, 2018, and began the process of recruiting and rebuilding influence. as well as beginining the recruitment process, This was also the beginining of Malaccas/Malayas cultural reformations, which brought into fruition the power of the Sultan starting with the construction of the Sultanate palace (this was the time that Moope roughly joined. he had been around prior to the palaces construction, but really began his influence around here).

After a period of little progress, Malaya would begin to see a boom in recruits and promising projects around mid to late May, starting witht the recruitment of players Jakob and Thorls, who upon joining swore to the job of "Malayan Royal Suppliers". This job prompted many reformations to the Malayan heirarchal system, shifting Malaya from an absolute monarchy to an Oligarchic Aristrocracy. further on, the addition Slycooper, and Suomi bred a sense of nationalism in the country, especially in support of it's prior seperation from Japan (for various reasons amongst each player)

Starting in June, Malaya was beginning to see much promise millatarily, as the recruitment of Heat1804 as High general sparked Malayan desires for combat prowess, however this was shortly lived as speculation and scandal surrounding Heat was brought to the citizens (brought to a head with the disappearance of 130 gold, and Heats sudden departure from Malacca). with the scandal of Heat, and the also sudden desire from Moope to leave the server (influenced by a myriad of things related to the servers overall experiance), Malaya was left without the Millatary leaders that inspired it so.

However, prior to these scandals, Parameswara would organize with the Island Union to adopt the town of Brunei into Malaya (Brunei being a disputed town by both IU and Japan), adding Taylor and Brunei to the small nation of Malaya (which prior to brunei's joining was simply reffered to as "the Malaccan Sultanate"). Shortly after, Parameswara would also organize the creation of Ipoh with the player Ian.0420, in the hopes of recreating the city of Dumai (a pre-modern malayan town).

Later on around the end of June, Malaya would see Hong Kong join, in the hopes of joining a "simpler, laid back" Nation. Malaya is still going through it's "Grand Reformation", which leader Parameswara describes as "A cultural, Heirarchal, and total shift of powers in the Malay society".

Begining in July, Suomi (after having been annointed as the Royal Imam of Malaya) would start to recreate the Quran, and start Malayas dedication to the goal of spreading the Islamic Faith (Although Malaya is a multi-faith nation). Suomi was also granted permissions over the mosque, which prior was used mainly for decoration rather than utility.