Peru, officially the Kingdom of Peru (Spanish: Reino del Perú), is a country in western South America, which is constituted as a monarchy led by King 78AbogadoPeruano, with the capital being Cuzco. Peru borders with Chile to the south, as well as Brazil and Inca.

In May 3, 2020, the meganation of La Plata bought the nation of Peru Viceroyalty for 700G at midnight (the gold was given by some members of La Plata, like Cristul12, RonaldFuu and 78AbogadoPeruano, etc). Later the star was given to 78AbogadoPeruano and the capital became Ica (Town now governed by Chofo70). The nation of Peru became a member of the SCU in June 21. The old nation of Peru made by Precise was disbanded (this was because Precise lost interest in EarthMC). This caused Peru Viceroyalty to claim the name and join the meganation of La Plata the same day.

The nation of Inca started to become more active and started funding towns in the south, so the king of Peru, 78AbogadoPeruano and his friend NicoGNV founded Cuzco at the night of July 4 (This is because the mayor got bored, and the territorial disputes with Inca). The new mayor of Ica became Chofo70 and the capital was changed to Cuzco. Llater on the same day 78AbogadoPeruano and Lammarca founded Arequipa (Sadly this town wouldn't last long, the reasons are still unknown, but this was probably because of the conflict with Kilomberox).

The Second Malvinas-Falklands War was a conflict between the town Malvinas (owned by Argentina) and the town BritishFalklands (owned by Joel02). Both were located on the Falkland Islands, in the South Atlantic. Peru participated in the war, in the 8 of July, 78AbogadoPeruano discovered that the permissions of the BritishFalklands town was misconfigured. 78AbogadoPeruano, Kilomberox, DiesSaturni and other players started looting the town.

The nation of Inca slowly stopped finding new towns in the south (reason unknown). The town of Arequipa fell with a beacon looted and saved by Joigrama (Mayor of Buenos Aires and King of and Lithuanan multidimensonal turkish british falkland peru vr Argentina empire federation). On the final days of september the SCU fell after Jolion, the mayor of Asuncion, started discussions with Kilomberox about some ideas, causing Jolion to completely quit EMC (there was a revival attempt by Olivio90 by hosting the SCU games, but it failed.). In the first days of October the king of Peru started to build a mapart plataform in Ica. King 78AbogadoPeruano started the planification of Cuzco which took 1 month. The king of Peru started building Cuzco, in March 2021 he opened a shop at the capital spawn. Peru started growing, with a definitive foundation of Lima and massive Cuzco chunk expansion.

The territorial dispute with Inca finishes

Peru joins Spain as a viceroyalty

Inca falls and the steal of the star

The nation of Inca located in northern Peru that had a lot of territorial disputes and conflicts with Peru finally fell after a long inactivity epoch. Chofo70 and 78AbogadoPeruano noticed the Inca nation had the town invite open and put a town in there to steal the star. The inca nation left Ica and Quito as the only 2 Inca towns remaining Pre- (Bolivia-Peru, Ecuador, Amazonas union) ending the territorial conflict and giving territorial (North Peruvian Lands) and national supremacy to Peru.

UnCry bought Colombia in the early days of March, the same day in which Inca fell, April 14. UnCry founded a town in the Iquitos Departament named Narcos at an old town ruins with a similar name. The king of Peru noticed this and informed Spain about the incident. Everything was solved the same day with the town getting disbanded and a border clarification being made the next day.

Peru actually has 7 ecorregions (In a future if we expand to the north we will get more): 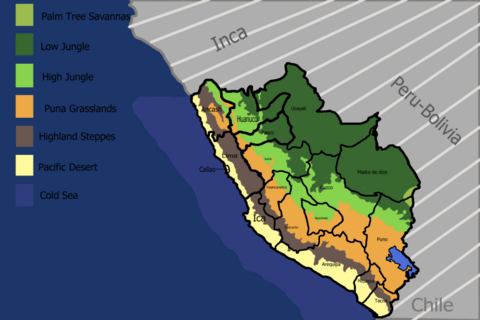 The Peruvian economy is not the best, but it's a young one and has been growing ever since. The most common and popular economical activities are trading, especially mapart shops, mapart making, and agriculture.

Common economical activities are still effective. Peru used to be one of the most common places to find gold, but nations eventually stopped mining there. The solution for this was just mining at other places of the earth