On May 7th, 2022, the town joined the nation of Netherlands, despite being located in France, more exactly Bretagne/Normandy.

Saint-Malo is part of the Breton alliance, with the neighbouring town Breizh, which sets a claim boundary between the two towns, and was established on May 18th, 2022.

Since then, the town kept expanding in claims, and new buildings and roads were made.

Tensions began arising in mid-May 2022 after the expansion of neighbouring town Normandy, as both towns were confilcting about claiming a certain area. On May 26th, 2022, the issue was eventually resolved, and a boundary for claims was set, and rivalry between the two towns ended.

With those new boundaires set, the town was then expanded south-east, forming a second claim 'square', both being linked together by only a few chunks. The town is thus split into 3 suburbs: Centre, Nord and Sud.

On July 27, 2022, the town was sold for 3.000 to the PLOC alliance. The town was renamed to Aiffres and joined the nation of Aquitaine. 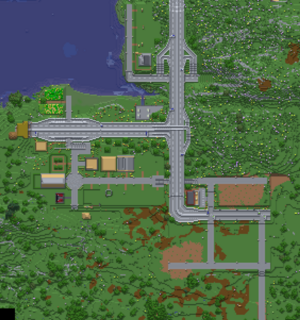 Map of the town

The town was located along the Emerald Coast, part of the English Channel.

It spanned over North-West Ille-et-Vilaine and a large part of Manche (french departments).

Most of the town's original terrain was a flower forest biome, with sparse trees and a high density of flowers and tall grass.

The terrain was also very hilly, which led to terraforming in favor of a mostly flat terrain, in order to build houses and roads more efficiently and also better-looking. 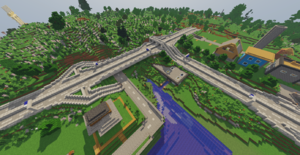 The most iconic building of the town was the two large freeways that span over the town, edge to edge.

They were inspired from real-life freeways, the E401 and E03. The E401 arrives from west to end into the E03; which goes north to south.

Those freeways are connected to a smaller road system through interchanges. The smaller roads then connected houses and other elements of the town.

In the Sud suburb, the E03 changed from a freeway to an avenue, with intersections cutting through without interchanges.

The Mont Saint Michel is a very famous location in real life.

It was originally planned to be built, but conflicted with the no terraforming rule of the server. 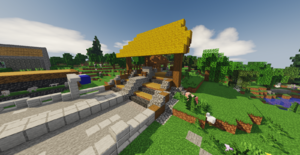 This gate marked the limit between Saint-Malo and Breizh, and also transitionned from the freeway to a smaller grass path road. 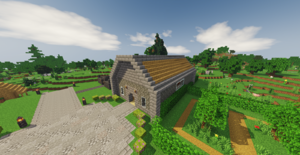 A simple church built in front of the town spawn, the Place Nationale. 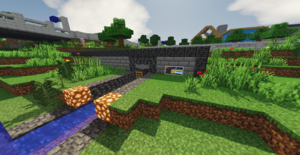 A villager farm built right by the sea, with a water canal going through to allow villager exchange. It was composed of a breeding room with three beds colored like the Netherlands' flag, and a hub room with trading villagers, and stock villagers for sale. 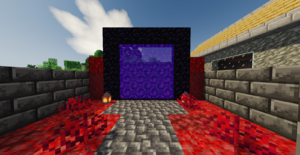 A simple nether portal with nether decoration. Behind the portal, a small path and bridges were made in the nether. Very nethery.