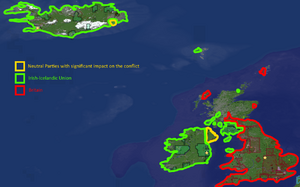 The Troubles are a series of ongoing minor conflicts, claim-blocks and skirmishes between the Irish-Icelandic Union and Britain taking place mostly in Ireland, Iceland and Scotland. No official declaration of war has been made by either side, but relations between the two nations are unquestionably hostile.

The Troubles trace their history back to a deterioration of relations between Britain and the Irish-Icelandic Union (IIU) following talks of bringing Britain into the union. While things initially seemed to be going well, it became increasingly clear that the ideological differences of the British leadership and the Union leadership would make cooperation and satisfaction of both parties nearly impossible, with the former government being focused on PvP and autocracy while the latter leading a more neutral, pacifistic, and democratic lifestyle.

The disagreement between the two nations grew stronger when several towns and high-ranking officials in Britain split off from their mother country, instead choosing to join the Union by their own choice, favouring the more easy-going players and the right to self-determination. While Britain announced that they would allow towns to come and go from their nation as they please, they protested heavily towards any towns joining the Union.

The conflicts that would come to be known as The Troubles began initially with Britain hunting their own dissident members, driving more and more of their towns and population towards joining the Irish. Britain was also accused by the Union several times of hiring players to patrol and camp towns in Iceland and Ireland, with multiple players being killed outside of claims, though no definitive proof of mercenary hirings has surfaced.

Soon after the beginning of The Troubles, a new town (Svalbarðshreppur) was made in Iceland and incorporated into the Union. The mayor of the former Union town of Djupivogur, Rowlets_ (aka. Littens), saw the town as a threat to their own expansion despite the two towns being situated well away from each other. As a result, Rowlets_ abused their permissions in Reykjavik, griefing the town's storage and farms. While the grief was rolled back and Rowlets_ was given a warning for their grief, week's worth of grinding and gathering was lost as the items were not restored to the chests. Shortly after, the mayor of Reykjavik announced her planned departure from the server. However, she claimed that this incident did not influence her decision.

Djupivogur soon thereafter left the Union and joined Greenland, before being kicked from Greenland and eventually, once more, re-joining them. Zeb, the Emperor of Greenland, sought to not risk further conflict and allowed Djupivogur to remain in the nation whilst explicitly stating that no support or assistance would be provided to them. Djupivogur has since been a site of several assassinations throughout the Isles, though no sign of collaboration with Britain exists.