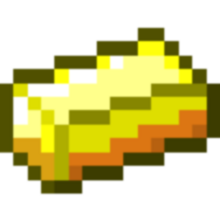 Gold is the International currency of EarthMC. It's primary use is to create towns and nations, which quickly made it valuable, which in turn gave it the use of buying things like tools, resources and blocks.

The precious resource can be obtained by voting, or selling items to or taxing those who have the gold.

Signs of Wealth - Worthness of Gold

Rich users will usually decorate with Gold blocks, as a sign of their wealth. Or even make gold armor, tools and apples, to show they have "too much" gold. To get a spectacle on value of gold, 64 diamonds (which can be harvested easily with a good pickaxe) costs 1 gold, a beacon costs 100, and fully maxed amor and tools costs around 200G. Gold is often used with Sign Shops however only if they are enabled. Gold Nuggets can also be used and are used sometimes for cheaper items like cactus and sugarcane which can be easily farmed in mass quantities.

Taxes are a concept which obligates all citizens of a town/nation to donate a portion of their gold to to the state. It is not used commonly currently, although this might change with the war plugin as nations will have to get war funds somewhere.

Robbery can be used in many ways, shapes and forms. The most common type is scamming, where a player will refuse to give an item even though the partner payed for it. This is most commonly used with Mending books, which are extremely valuable with the removal of villagers. Others involve trading fairly but then instantly killing the player with pit traps and collecting their items with hoppers, an example of which is Honduras, which dabbles in the trade consistently.

Gold has always played an important role in the international monetary system. Gold ore were first struck on the order of King Croesus of Lydia (an area that is now part of SPQR), around 550 BC (Before Christ). They circulated as currency in many countries before the introduction of paper money. Once paper money was introduced, currencies still maintained an explicit link to gold (the paper being exchangeable for gold on demand). By the late 19th Century, many of the world’s major currencies were fixed to gold at a set price per ounce, under the ‘Gold Standard’ and this persisted in different forms for about one hundred years. To aid further research by scholars, journalists and all those interested in gold’s monetary role, the World Gold Council commissioned a compilation of extracts from key historical documents from 1660 to 1999.