The Rise of Oslo

Oslo was a town that existed between somewhere in late 2016 to around December 2016 or January 2017. Oslo was owned by a player called Roger67204 (Now he is called WextraMC). Oslo was a town, that was located actually west of actual Oslo and they had 3 outposts and a wall around the center of the town. Their outposts were in Manchuria (China), Madagascar. They also had an outpost in USA which got removed after the Oslo-Panama war. Their goal was to have an outpost in every continent on the server, but because the owners and residents went inactive, the town got removed. 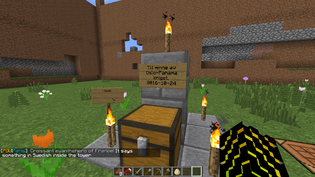 The same day as they made their outpost in USA, the owners of Panama said that they didnt want Oslo to have that outpost. WextraMC responded that he would not remove it, and then Panama built a high dirt wall all around the outpost. WextraMC got mad and then called KarlOfDuty to help him. Karl and Wextra fought a bit against Panama and lost, but it ended with the outpost getting removed. This was what called the Oslo-Panama war. Wextra has confirmed the date of the conflict as 24 Oct 2016.

In May 2017, a player called dolphinranger86 built the town Tronden at the location where WextraMC had his town. Dolphinranger86 built a fountain in his town with two signs on it. The first said "In memory of Wextra's old town" and the other said "And in memory of the old town Oslo". The owner of the old Oslo, WextraMC, started playing on the server 13 July again and built the town Karakorum in either Russia, Kazakhstan, China or Mongolia. Oslo was part of 3 nations on its time, Sweden, Panama and their own nation, United_Nations. Their own nation was the third on the server but it only lasted for some weeks/days due to inactivity. WextraMC has said that he will try to recreate Oslo, but with his town Karakorum if he gets enough gold. Nothing else was left of Oslo.

If someone has more information, please write it here.