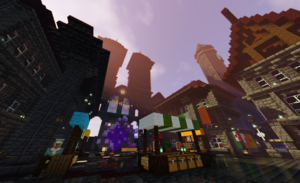 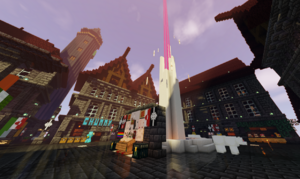 Founded by ThootSlayer in Terra Aurora, Solitude is a Metropolis right in the middle of Greenland's land mass, it is the largest city in the Nation of Greenland.

Intended to join Britain as one part of its dominion but too far to do so, the City eventually joined Greenland. Due to its leadership, Solitude became a royal town of the Nation and the largest, thanks to Nation Leader Zeb___ gold contributions and ThootSlayer persuasive recruiting.

The City Canva claim protection was funded by the old capital, Godthåb. Eventually, a Nether Highway was established between the two Cities.

On the 29th May 2022, the Second Canva was totally claimed thanks to funding from the capital and the influx of new residents in Solitude.

On 03/06/2022 the construction of the third canvas begins, all chunks needed are claimed. The city is expanding its borders faster than it can build. It will be used by people from Sonora.

On June 7th 2022, Remcodd, a notorious map art reseller and his lackey Jedna, stormed the City in a desperate attempt to steal and grief the city, committing acts of terrorism while being invisible. This event followed nation leader Zeb___ order 66 on some map arts, ruining them remotely in revenge of unauthorized resellings. It is the first time that Solitude was under international stage. The City starts to get many visitors.

On 19th June 2022, the City Became the new Capital of Greenland, ThootSlayer have been made into chancellor under the guidance of Zeb___, Nation spawn was set on a town within the borders of Solitude

On 22th June 2022, Solitude reaches 77 residents, a period of housing crisis begins, real estate market is skyrocketing, residential plots are missing, there is a general over population

On 5th July 2022, plans for the Town's Arena are lied, Rahgrot Arena was completed the 15th July 2022. There is a 4 chunks pvp space, as like as shop plots around it. The Dragon Throne of Greenland is located there.

On 20th July 2022, the Emperor felt ill and resigned, ThootSlayer took control of the Nation until the former ruler will get better.

The urban layout is lied down over high snowy hills of Inner Greenland, making its development harsh as hash is its winter. Inhospitable and barren land with extensive whites going until the horizon, the City is a vital hub and check point for travelers and adventurers in this cold and freezing environment. The easiest way to reach Solitude is by Nether Portal, linked to the city of Godthåb, northern Britain and Portugal via the Nether Highway constructed by the TransCo (Trans Continental Nether Highway). 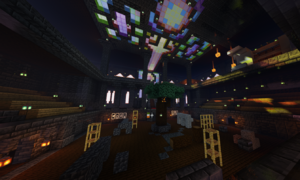 The main export of the City is its varied collection of Map Arts made by the City's protected Canva and Enchanting Books like Mending made tanks to its Secret Ancient Nordic Arts.

Future expansion plans for the city include Wan Shi Tong Library, The Colossus of Greenland and the Imperial Navy located in the homonym town at the south of Solitude