While the founders of Zaborov, comrades ToKKe__ and Jakubex543, were collecting gold, an unknown member of Indochina met them and tried to kill them. This member was stronger than them, and he stole every gold that they owned. Because of that, they had to leave the island that they wanted to live on, and they traveled from Indochina's territories to nobody's Russia. They have finally found a good place in the Ural Mountains and settled down there.

Founders of Zaborov then began to collect loads of gold, soon they had enough gold to create a town, and claim some terrains. Also, they had enough materials to build the first roads, and houses, so they got to work. After a few days, they had finished flattening the terrain, cutting down all the trees and digging through the mountains. An hour later, they have also finished building their houses and Arcadio Street.

The Fire of Revolution

After the hard work, of building the town, both Comrades, and the Founders of the Zaborov were thinking about the future of this town. They decided to make government from zero and mostly based on communism. Now after creating the government, they began to give places to live to the other people and share their belongings with the citizens of the Zaborov. Because of that, Zaborov has begun to grow, and now it has 23 chunks, 5 people, and the town has joined the Khanate of Sibir.

Finally, Zaborov changed, built Lenin's Library, and made contact with Poland, and other towns - Yekaterinburg, Karpinsk, Duwan, and Frankenweiler which has given Zaborov a big chance - a chance to provide a better quality of life for everyone. Zaborov has used this chance, and now built an underground metro, which comes through many towns in Russia. With help of many hands, the Zaborov provided many things for the people, and because of that - joined the Ural nation. Thanks to the Ural nation, people from Zaborov, could now travel to other villages, towns, and countries!

After negotiations ToKKe__ left the Zaborov to create a town on east, which is called "Velky Novgorod". 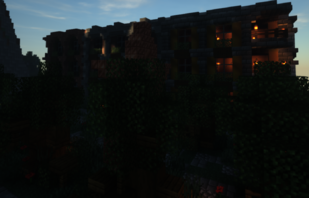 Zaborov lies at an altitude 100 blocks above the bedrock level, in the Ural Mountains, in Europe. The town is located in the taiga biome. Zaborov is surrounded by high mountains and spruce forests.