The server queue is a standby server to access the main server.

The average number of people in a queue is normally between 30 and 120 people. During off-peak hours, there are only around 20 to 50 people in the queue. The waiting time for the queue during off-peak hours is 20 minutes to 1 hour. Off-peak is usually around 5am to 10am GMT. To avoid waiting you can use a premium or buy priority queue. 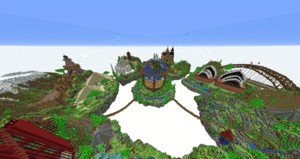 The queue is a flying island, in front there are stone brick stairs leading to the main parkour routes.

To your left are spawners. Doing /kit pve gives you some stuff to fight them. You can get good stuff by killing the mobs. The mobs are Zombies, Skeletons, Wither Skeletons, and Witches.

Behind you is a mini parkour and castle.

The island is quite small. It takes less than a minute to go around it. Various traps, secret rooms, details, and parkour shortcuts exist around the island. Try to find them all!

Multiple parkour paths exist, some with fancy names, some easy, some hard, some incomplete.

This is a fairly long path. After going past the two lava flows follow the signs to Old Parkour. It exists along the same path as Atlas's Parkour for a bit before breaking off and going its own direction underneath the island, then above the island, then below. Pretty easy parkour with fun activities along the way. It is mostly built with white-stained glass and starts off with some slimeblock jumps.

This parkour heads straight ahead where the Old Parkour jumps down. It leads to the giant statue of someone imitating the Greek divinity Atlas. More difficult but much more beautiful. Parkour made by 1212ra.

This parkour splits off from the Atlas's and Old Parkour routes and involves multiple ladder jumps, contraptions, fence-jumps, and is overall a lot harder. After you reach 1212ra's island you can either jump back to the main island or continue on your way to the Temple of Plutus.

Once there you can either continue on the Prismarine Path, detour to the Road to El Dorado, or Death. Parkour made by 1212ra.

This is built mostly of prismarine and loops around under the island. Beware: some jumps are very difficult. Eventually ends with a connection to either the Winner's Box, or to the Fun Route

Long series of near-repetitive difficult jumps. The lowest parkour route and one with a less-than satisfying ending.

One week after the 1.17 update, Fix said that the server would go down for maintenance and a new queue system would be tested. Template:Quote (Matthi3000 ) Every time one default person logs in the game, one premium and one priority joins in. Fix didn't state where OG donators layed on the heirarchy.