Edmonton is the northernmost city of the Province of Alberta, situated on the banks of Alberta's Lesser Slave Lake. Founded on the abandoned townsite of the old city of Strathcona on April 15, 2020, Edmonton has rapidly grown into a cultural and economic hub for all of Northern Alberta.The town has recently constructed several new skyscrapers, a shopping mall and several infrastructure improvements as it continues to grow.

The city is home to a variety of unique neighbourhoods, each with their own distinct characteristics. The City of Edmonton maintains a register of the city's neighbourhoods.

The town is the capital of Alberta and is home to the Legislative Assembly of Alberta. Alberta is a province of the Salish Federation and a member of the Canadian Republic and Northern Confederation. The current Premier of Alberta is xGoat of Edmonton and the Lieutenant Governor is Fortis Ipsum of Sherwood Park. 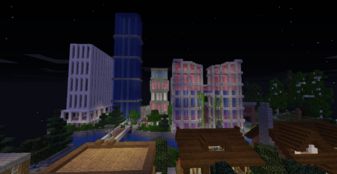 A picture of Edmonton at night in July 2020.