Tymek_T is an old EarthMc player who first joined on 27th of October 2017 (back in Classic). He was the first polish player to join Terra Nova and to create the first city of Poland - Wroclaw. He used to move from place to place very often, but since his return to Lika, he finally settled for longer.

Will be expanded in the future... 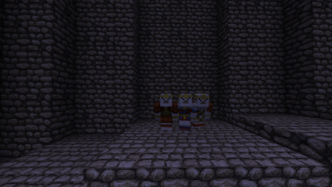 Manco Capac (Tymek_T), together with two of his Inca friends - Pachauti_ and Atahualpa_

Tymek_T first joined Terra Nova on 28th of October 2018, without any of his friends around, he had to travel from Iran to the British Isles, where he was given 32 gold by MineHero43. He would then sail from Britain, through danish straights, down to the Szczecin Lagoon. From there Tymek walked south, till he reached the place, where he was supposed to establish his first town - Wroclaw.

With the official release of the server, a lot of Poles were coming from all the places to establish cities in what will later become Poland. In the first days of pre-polish Wrocław, the city quickly grew with population, it was so quick that there was almost always someone online. Tymek_T, who has been known in his classic surroundings as a good builder became overwhelmed by the overpopulation of his own town. Everyone was building whatever they wanted and the city was a true chaos. That was the moment, when he officially decided to leave the town, leaving the role of the mayor, to Dymoslaw.

After leaving Wroclaw, Tymek_T was very alone - away from all the people whom he could trust. He was also pretty poor at that time. Eventually he managed to collect another 32 gold for the creation of a new city. He settled in southern France, founding the town of Nice (No, not the current Nice, Tymek is the creator of the first Nice, on which ruins, a new city, with the same name, was later founded). He quickly disbanded it because of the lack of materials to build Provence-style buildings.

Then he moved to Greece (under the rule od Byzantium), where he founded yet another small town in the north of Attica, where the city of Thessalia is now located. Shortly after, he once again moved out and this time travelled to the another side of the globe (Korea to be exact), where he created Gyeongju (Ruins of Gyeongju are still standing to this day). He really liked the East Asian vibe and was satisfied with his town, unfortunately the so called "Korean Empire" began declining and became almost inactive. He would remain one of the only active "Koreans" and even construct a Wall with Bastilles along the Sobaek Mountains. Sometime, around the end of December, Tymek_T would move 2 more times for shorter periods of times, first one being to Georgia, where he created Phasis, and the seocnd time being Galicia (Spain), where he founded Pontevedra (which he disbanded less than a week after creation).

After disbanding Pontevedra, Tymek_T got tired of Europe and once again started looking for a good spot somewhere else. After a few days of being townless, he managed to find a "perfect place" on a small island, north to Papua New Guinea. He called it New Arran and would stay there for the next couple of months. Tymek joined the Federation of Micronesia (which was back then one of the British colonies ruled by FutureCW). He fortified the island and even built 3 small buildings in a specific British-colonial style. He would often visit neighboring island of Papua, which he used as a place for exploitation. All of the necessary materials for building and more, came directly from Papua New Guinea: Villagers, livestock, Wood, Ores and even parrots (Yes, because of people like Tymek, there are no wild parrots anymore). He even dug through Bird's tail Peninsula (One of new guinea's peninsulas) for easier access to Australia. There was one problem with New Arran though... Tymek_T was very lonely in here, there was literally no-one in this region online when he was logging in, thats because all of Micronesia's residents were Americans or Australians and so it was impossible for him to meet any of them. One day, when Tymek was online, the city of Tokyo fell and he managed to be the first person to raid it, that event caused him to enrich really quick, but that didn't stop him from moving one more time... This time, back to Europe, Croatia to be specific, which was back then (May 2019) controlled by the Roman_Empire.