The town of Stockholm (today's Gamlastan) was founded on October 31st, 2018, which became the capital city of the First Kingdom of Sweden, which was founded the 6th of November, 2018. Even though not much is known about the early history of Stockholm, its roots go all the way back to the beginning of Terra Nova. Stockholm and the First Kingdom of Sweden were originally founded by lucled and caarliitoo, who at a later stage gave it to xWaazes. xWaazes then made SweHarry king and SweHarry then made Wextra king. Wextra and SweHarry ruled the country together, however. Wextra also offered to give all of his gold to the duke of Gothenburg, due to Gothenburg's superiority. The strong and independent leader of Gothenburg though declined, due to his honour.

In early May 2019, Wextra was permabanned from the server, with Sweden having no leader. However, as per towny mechanics, the newest member of Stockholm would instead be given the title of king when Wextra reaches his limit of inactivity. On June 14, 2019, Wextra reached that limit, and the title of King was to be transferred to MM1kael from Greater Finland. MM1kael had joined Stockholm a week prior in order to take over in Sweden. Shortly after the switch, mr_emppu708 was named the new king. All Swedish Councillors were immediately kicked from the country, effectively turning it into a puppet led entirely by Greater Finland.

Video of the Finnish burning the flag of Sweden in Stockholm: https://www.youtube.com/watch?v=d9SkCqo0v_Q&feature=youtu.be

After months of inactivity, Stockholm (Then called Ruotsi) was on the edge of falling due to the entirety of Greater Finland leaving EarthMC to create a Finnish version of EarthMC several months earlier. During this time, Riftal had established the new nation of Finland that would resurrect the old Finnish empire. The Nation of Finland extended their hand to Ruotsi for them to become a puppet state, as per the agreement with the previously Greater Finland, Ruotsi agreed upon the terms and joined Finland.

Soon after Ruotsi became a puppet of Finland, an exiled player that controlled the nearby city of Kungsholmen (Then known as Enkoping) had returned from exile, Linux was left with no other choice but to leave Sweden (Then known as Kalmar Union ) to join Finland in order to fully take control of Ruotsi and give it full reboot as it desperately needed. Linux called upon his family to join him in this endeavour, he and Graylynn joined Finland with their towns and soon after had Linux's brother Archiekin take control of Norrmalm (Then known as Nya Stockholm) which was currently inactive due to their leader Utforskarmannen being unable to continue leading it. Linux had effectively taken three Kalmarian/Swedish cities and given it to Finland, giving him and his family a new home. Linux soon reached out to Ruotsi's past leader Mr_emppu708 to form a friendship in order for Linux to be able to fully merge the towns of Enköping, Nya Stockholm and Marskinlinna (Ruotsi's capital) into one, changing their names in the process to a city district in Stockholm.

A few weeks later, the rank of premium was released giving players the ability to change your nation colour, Linux requested for Mr_Emppu708 to change it which led to Linux gaining control of Ruotsi to execute the colouring. During this Linux also made changes to Ruotsi, restoring ally statuses with nations and also changing the nation name from Ruotsi to Stockholm to reflect his plans to create a Unified Municipality that would act as one single capital.

On 30th of March, 2020, Finland and Sweden engaged in discussing a border treaty, present during this was _CrA6914, Riftal, JustADonutHere, Noveritsch, Linux and ENLS. The purpose of the treaty was to effectively diminish all border conflict and trespassings by each side. The discussions were hectic once Stockholm was mentioned. Each nation suggested ways to deal with the situation, Sweden made the argument that Stockholm should become independent from either side, to effectively negate the Finnish presence in Sweden, Finland disagreed as they saw it as a colony with their own borders and that Stockholm did not represent the borders of Finland. Sweden countered their argument by classifying all of the cities that were currently being affected by the border treaty as colonies, and that they should all be treated the same, regardless of their size and nation status. Finland felt irked and requested for Stockholm to be excluded for now. Continuing the border discussions they finally reached an agreement and established The Kiruna Treaty. During this Stockholm held a vote without Finland and Sweden, if they should become independent. Present during the voting was, Linux, mr_emppu708, Graylynn, Archiekin and OddbirdBlanc. The vote was finalized and the result was more than majority (4-1), it was decided that Stockholm should become independent. Neither Finland and Sweden stopped the vote nor the nation of becoming independent effectively making Stockholm independent from both sides.

After the declaration of independence was created, Stockholm applied to the Union of Atlantic States, during this time, Finland applied as well. After the voting procedures were concluded, Stockholm's acceptance was officially announced. Much to the dismay of multiple citizens, Finland did not get accepted, which makes this their fourth attempt to join the union.

On the 11th of April 2020, Stockholm, Scandinavia and Götaland announced the creation of The Swedish Empire with the intentions of reuniting Sweden. Not long after, the nation of Sweden also accepted the terms and joined the Empire.

The Governmental focal point of Stockholm via the Parliament. Featured is also Kungsträdgården, Drottninggatan and T-Centralen, a transportation hub, that also features 7 stores.

A large island providing residential homes and where the Royal Palace is located.

Southern part of Stockholm, HQ of SVT was previously located in Kungsholmen.

Stockholm have many yearly traditions that any citizen or foreigner is allowed to participate in, more information on dates check out Stockholm's discord.

March 29, 2020, the day Stockholm was established, is yearly celebrated.

Some residential houses in Gamlastan(Before the Finns destroyed it) 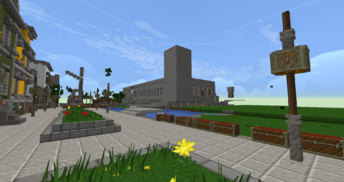