The Kingdom of Mexico, usually referred to as Mexico is a North American nation in-between the Californian Empire, and America, Yucatan, and Cuba. It's capital is the City of Guadalajara.

The nation of Mexico was founded on May 15, 2022 after 2 weeks of effort by the now King, FroyourFilms. He was originally making the nation of New Galicia, but took on secretly the task of making Mexico after a suggestion by EstiQT. It was the 66th nation on EMC Terra Aurora.

By the 19th day of the foundation of Mexico it had begun to amass towns and a community, with 7 towns. Upon Sonora being founded by HeyItzSaph on the 18th of May, the Mexican Empire was proclaimed that same evening.

After Louisiana's June 12th declaration of war on Cuba, 7 other nations, soon followed declaring war on Cuba. After this the Mexican Congress deliberated and on that afternoon announced their neutrality on the war.

On August 12th after plenty of discussion; Mexico, Sonora, Nevada, and Cuba merged to create Panamerica.

In the days following the creation of Mexico, a simple Congress made of trusted mayors and individuals was founded to debate on national affairs. They would discuss and when a consensus was formed, Emperor FroyourFilms acted on it.

Despite his intentions to formalize and democratize the Mexican Government, it was only after months had passed that on August 30th FroyourFilms announced an upcoming Government overhaul while unveiling an interim Cabinet of Kratzzi, Pancat, Nomad_Sky (King of Sinaloa), and Saph. (Reina de Sonora)

Mexico and Nevada sign a Military alliance on June 19th after much procrastination from FroyourFilms. 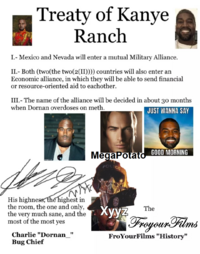 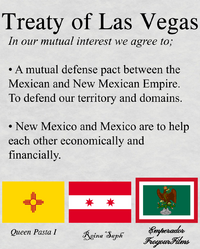